The Cost of War 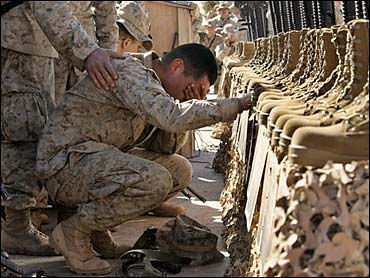 In 1998, John Mark was about 16 years old. I was 21. He was in a different world. John Mark was hell-bent on joining the Marines as soon as he was old enough. He had dreamed of becoming a Marine for years. It was probably his greatest ambition at that time of his life.

I saw him racing toward military service, and I was worried. I have never been the type of person to even consider joining the armed forces without a draft. Bloodshed is something I don’t want to see or cause, if I can help it. Violence is abhorrent to me. It makes me sick when people treat each other like pieces of raw meat to beat into a pulp.

I know that’s not what serving one’s country is all about. I just have very strong reactions to thoughts of going to war. People like me may not be born with whatever it takes to immediately understand the need for voluntary soldiers.

John Mark was, though, and I hated it. He had such a tender, compassionate heart toward people, especially women who had been mistreated. He was very generous and not so seared that he couldn’t express his emotions without shame. I was afraid of what war would do to him, assuming he survived.

Well, the time came and John Mark signed up. I don’t know where I was at the time. We hadn’t spoken in months. I was furious that he wouldn’t listen to reason. I was so worried about what war would do to him that I would have forced him to stay if I could, regardless of how wrong I would be.

Years went by, and one day I see a mutual friend of ours, Gabe, at a softball park. He hands me the phone and tells me to say hello. John Mark was on the phone from somewhere in the Middle East. He sounded different – tired beyond human comprehension. The kind of exhaustion that comes from experiencing things that your mind and heart do not know how to react to.

I was so glad to hear his voice. He’s like the younger brother I never had. During or after that phone call, I cannot remember which, I felt a new emotion toward John Mark: respect. He had become a man in ways that so many only dream of. He had faced the gritty reality of violent death. He had lived for weeks knowing that there was a real enemy nearby that wanted to kill him. Real men who would eagerly shoot him if given the chance.

It’s too much for my little mind to wrap around. I’ve not been there. I’ve not experienced it. I am merely a civilian. I am an outsider. I belong to that group of people who, like dumb sheep, need to be protected because they can’t protect themselves and they don’t know what’s going on in the world around them.

This site uses Akismet to reduce spam. Learn how your comment data is processed.

Manage Cookie Consent
To provide the best experiences, we use technologies like cookies to store and/or access device information. Consenting to these technologies will allow us to process data such as browsing behavior or unique IDs on this site. Not consenting or withdrawing consent, may adversely affect certain features and functions.
Manage options Manage services Manage vendors Read more about these purposes
View preferences
{title} {title} {title}